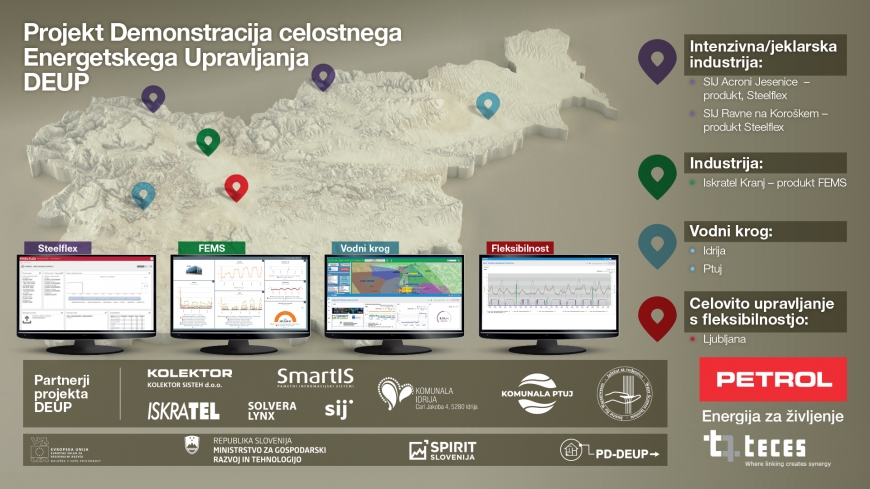 We have successfully concluded the development & demonstration project “Demonstration of Integrated Energy Management (DEUP)”, demonstrating that introducing management systems is not only technologically significant but also economically viable.

The project also showed how a consortium of leading public and private companies in Slovenia – all with complementary skills – is able to develop joint solutions, which are capable of running alongside the most advanced services in the world market.

In TECES, we are proud of our role in the DEUP project, as we have been part of this project for its duration – from the development of the initial outline of the project and partnership to the preparation of the project proposal for the public call, the approval of the funding, implementation of the project and its successful completion. Rather than being partners in the consortium, we are the force which has successfully provided coordination support to all project partners in the implementation of development activities and the monitoring of the project’s progress towards the objectives set.

The project’s aim has been to develop solutions for a more flexible electricity market, and the successful monitoring and managing of consumption both in the industry and by water infrastructure operators. The project brought together previously unrelated fields: energy-intensive industries (steel industry), water systems, traditional industries and the electricity market. With a unified management, as well as integration of various fields and optimisation, we managed to make otherwise costly systems viable and profitable.

The following results have been achieved in the framework of the project:

The three-year PD-DEUP project that was carried out between July 2017 and August 2020 was financially supported by the Ministry of Economic Development and Technology (Si MoEDT), SPIRIT Slovenia – the Public Agency for Entrepreneurship, Internationalisation, Foreign Investments and Technology – and the European Union, through the European Regional Development Fund (ERDF).

One of the reasons why the project partners decided to take part in the implementation of the DEUP demonstration project was the state’s financial support. This support made it easier to develop and test new concepts and technologies in practice. The possibility of introducing and testing newly developed solutions faster, thus gaining viable experience, gives a significant competitive advantage to the project partners in the global environment. It should be noted that the joint development of solutions accelerates the creation of long-term development partnerships between participating companies.

For these reasons, it is of crucial importance that the state supports the implementation of development & demonstration projects – which are one of the key innovation support measures needed if we want to increase the competitiveness of the entire Slovenian economy.

TECES’s role in the project

TECES has once again successfully justified its role as the promoter, holder and coordinator of key strategic partnerships and projects in the creation of synergies between partners in the PD-DEUP project.

Given its experience, the organisation has taken a proactive role in preparing the initial outline of the project and partnership, and successfully coordinating the preparation of the project proposal for the public call. Since the Si MoEDT agreed to co-finance the project, TECES has successfully and efficiently continued its role as project coordinator. It provided expert support to the lead partner PETROL, d.d., as well as other partners, in the project implementation, monitoring progress and the meeting of set targets.

We are particularly pleased that the initial project outline arose on the basis of activities engaged in with our members in the establishing of the focus area: “Integrated energy management and energy-efficient solutions” and the search for key stakeholders (more at HERE ).

There are no up-coming events

We use cookies on our website. Some of them are essential for the operation of the site, while others help us to improve this site and the user experience (tracking cookies). You can decide for yourself whether you want to allow cookies or not. Please note that if you reject them, you may not be able to use all the functionalities of the site.